Raspberry Pi And The IoT In C - DS18B20 Temperature Sensor

Using the software developed in previous chapters we show how to connect and use the very popular DS18B20 temperature sensor without the need for external drivers.

You can now buy a print or ebook edition of Raspberry Pi IoT in C from Amazon.

This our ebook on using the Raspberry Pi to implement IoT devices using the C programming language. The full contents can be seen below. Notice this is a first draft and a work in progress.

The Maxim 1-Wire bus is a proprietary bus that is very easy to use and has a lot of useful devices you can connect to it including the iButton security devices which were described in the previous chapter.  However, probably the most popular of all 1-wire devices is the DS18B20 temperature sensor - it is small, very cheap and very easy to use.

While there are drivers for 1-wire under Linux they have a few problems and before your program can run you have to make sure they are installed. However the protocol is easy enough to program in C and the Raspberry Pi is fast enough to work with it without needing anything extra.

The DS18B20 is available in an number of formats but the most common makes it look just like a standard BJT - which can sometimes be a problem when you are trying to find one. 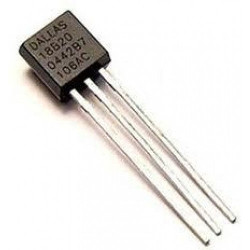 You can also get them made up into waterproof sensors complete with cable. 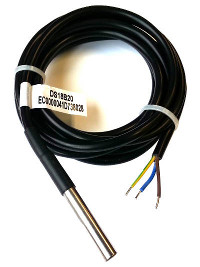 No matter how packaged, they will work at 3.3V or 5V, Its basic specification is:

It can also be powered from the data line making the bus physically need only two wires - data and ground - however this "parasitic power" mode is difficult to make work reliably and best avoided in an initial design. To supply it with enough power during a conversion the host has to essentially connect it directly to the data line by providing a "strong pullup" - essentially a transistor.

In normal powered mode there are just three connections:

Ground needs to be connected to the system ground, VDD to 3.3V and DQ to the pull-up resistor of an open collector bus.

There can be multiple devices on the bus and each one has a unique 64-bit lasered ROM code, which can be used as an address to select the active devices. For simplicity, it is better to start off with a single device and avoid the problem of enumerating the devices on the bus - although once you know how everything works this isn't difficult to implement. 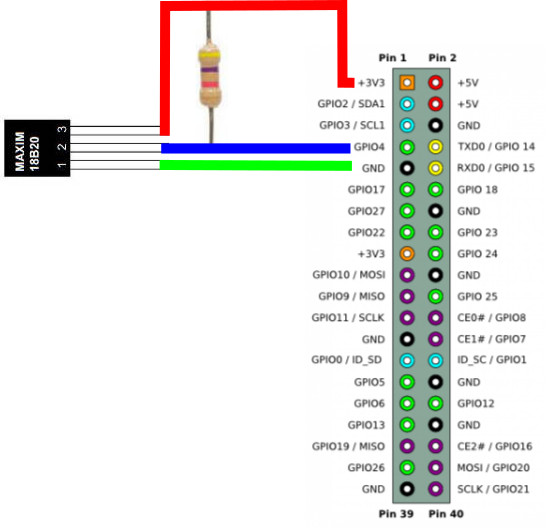 You can build it in a variety of ways. You can solder the resistor to the temperature sensor and then use some longer wires with clips to connect to the Pi. You could also solder directly to the Pi, a good plan for the Pi Zero or use a prototyping board.