micro:bit IoT In C - Getting On WiFi

The micro:bit has a radio that works in Bluetooth LE and point-to-point ad-hoc mode, but at the moment it lacks WiFi connectivity. The solution is to use the low cost ESP8266 to make the connection via the micro:bit's serial port. 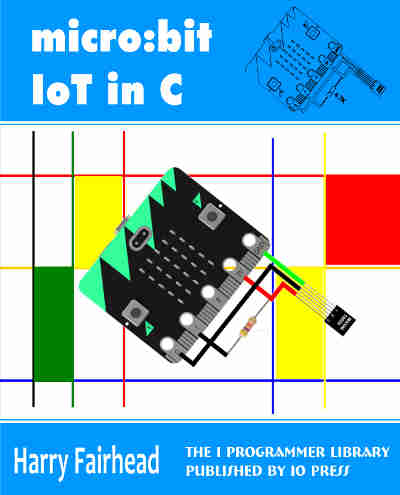 The ESP8266 is a very odd and amazing device. It is remarkably low cost, $5 or less, but it is a full microprocessor with GPIO lines, RAM and built in WiFi. It is built by a Chinese company Espressif Systems but there are a number of copies on the market. The proliferation of devices and software revisions makes it difficult to work with, but it is well worth the effort.

While you can set up a development system yourself and program the ESP8266 to do almost anything, it comes with built-in software that allows it to be used as a WiFi module for other processors. This is how we are going to use it to give the micro:bit a WiFi capability.

The ESP8266 connects to the micro:bit using the serial port. The micro:bit controls it and transfers data using a system of AT commands. These were commonly used to control modems and other communication equipment and they still are used in mobile phone modems.

The module that is used in this chapter is the ESP-01 which is widely available from many different sources but they all look like the photo: 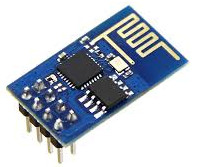 There is another version, the ESP-07, which comes with a screen RF stage and other advantages and this should also work.

A bigger problem is that there are new versions of the firmware and some of these might not work in exactly the same way. However it should be easy to make the changes necessary.

There a number of minor problems in using the ESP8266. The first is that it comes with an eight-pin male connector which is not prototype board friendly.

The best solution to this is to use some jumper cables - female to male - to connect it to the prototype board or use female-to-female cables to connect directly to the micro:bit breakout board.

A second problem is caused by the fact that the device is powered from a 3.3V supply. This might tempt you to try to power it from the micro:bit's 3.3V supply.

This will not work.

The ESP8266 takes a lot of current, 300mA or so, when transmitting. The micro:bit cannot supply this much current. You need to use a separate 3.3V power supply. Of course you can use this to power both the ESP8266 and the micro:bit and in some situations this would be an advantage.

You can use one of the many low cost prototyping board power supplies with no problems: 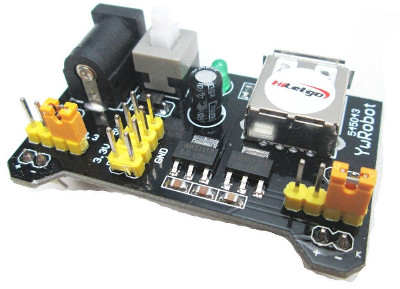 The pin out of the ESP-01 is usually shown from the component side, but in fact the pins that you want to connect to are on the other side. To make things easier the two views are given in the diagram: 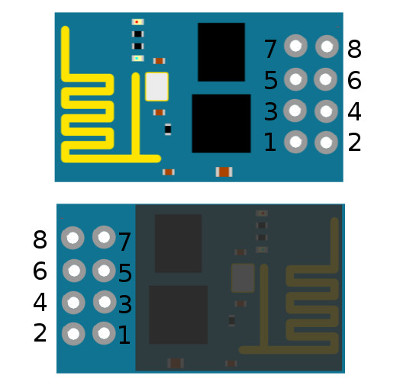 The pin functions are: 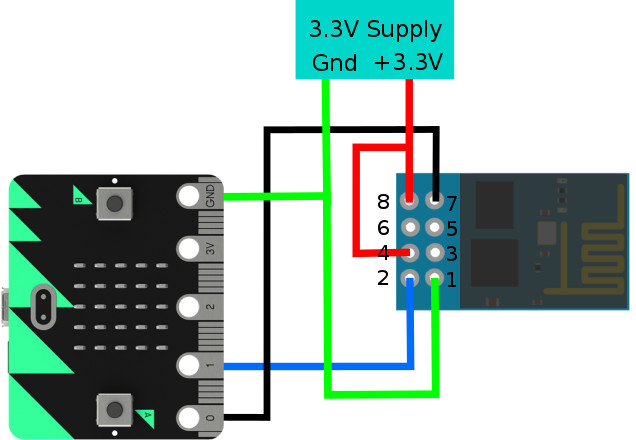