Although decimal hardware is rare, there are lots of reason to want to work in decimal in software. For example, binary often doesn't give results that are the same as a human would get doing manual arithmetic. For example, if an expression results in 0.1 in decimal this isn't exactly representable in fixed point binary. However, for integer arithmetic binary gives the same result as decimal arithmetic. A better reason for needing decimal is that this is what many sensors deliver to your interface.

Now available as a paperback or ebook from Amazon.

Applying C For The IoT With Linux 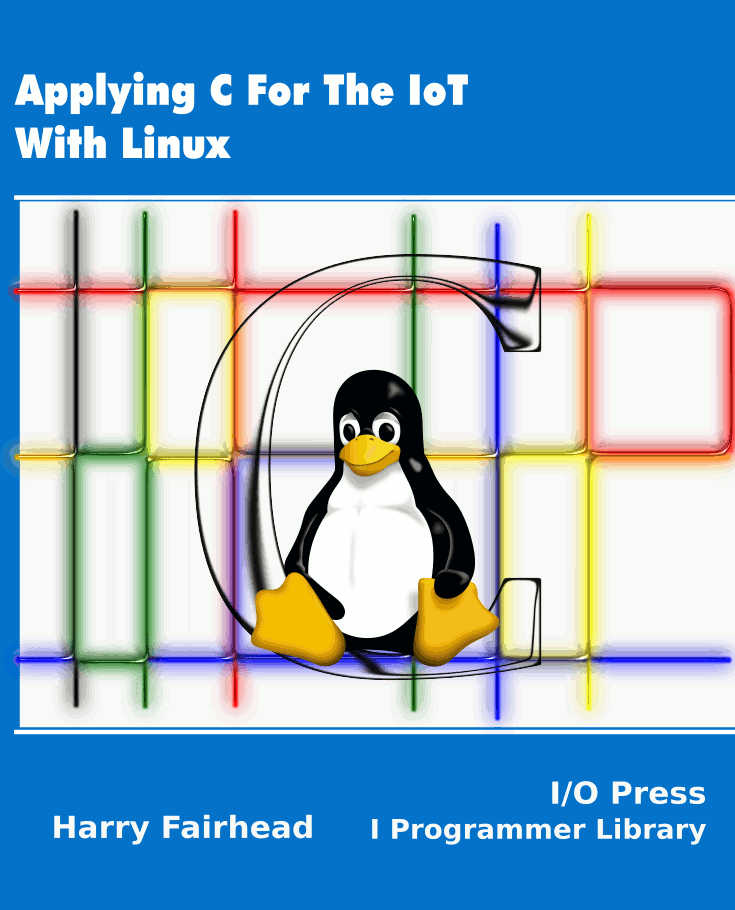 For example, a sensor might naturally return some decimal digits to represent a temperature, or a numeric display might need to be fed decimal values. You can avoid decimal arithmetic by always converting to binary and then back to decimal as needed but in many cases it is simpler to stay with the representation the device provides. It is also instructive to see that in C and in low-level programming in general all we have are bit patterns and how you interpret them is up to you.

Binary Coded Decimal is very simple. The bit patterns 0000 to 1001 are used to code 0 to 9. These bit patterns can be stored one per byte or, packed as BCD, as two digits per byte. Four bits are often referred to as a nibble and so we use one nibble to store a digit. Notice that you are not using the full range of the nibble and often the unused values represent symbols such as plus or minus.

To convert a binary value to BCD all you have to do is extract the decimal digits. For example, starting with:

you can get the least significant digit by taking the remainder on division by 10:

The remainder of 123 after division by 10 is 3 and so myBCD1 now contains 3. All we now have to do is repeat after removing the least significant digit:

Now you have seen how this works, it is easy to convert it into a loop that will convert any positive binary value to BCD:

It is worth remembering that to convert BCD to an ASCII char you simply have to add 0011 to the start of each nibble. You also have to unpack each nibble into a byte. One way to do this is to shift right and use a mask:

To convert to binary you simply proceed as you would with a decimal number, but in this case extracting nibbles for each digit.

Now we come to the difficult topic of how to perform BCD arithmetic. If you have a lot of arithmetic to do then the best solution is to convert to binary, do the arithmetic and then convert back. This has the advantage that you know how to work with binary and the disadvantage that, if it involves division, you might not get the same answer as a human.

In many cases, however, the arithmetic that you want to do is very simple. One way of doing BCD arithmetic is to unpack the nibbles into an array and then add nibbles one by one. The problem with this is that you have to take care of the decimal carries. For example, 9+1 gives you a nibble that isn't a decimal digit i.e. 10 or 1010 in binary or A in hex. To correct this you have to subtract 10 from this nibble and add one to the next nibble so performing a carry. That is, if you add the nibbles together you have to scan for values that are greater than 9 and from each you subtract 10 and add a carry to the next nibble. Notice that as 9+9 is 18 decimal or 0001 0010 you can even overflow 4 bits and so each nibble should be stored in its own byte.

Consider for a moment addition of just two BCD digits each one stored in a byte. For example:

If you have implemented BCD arithmetic before, you might have wondered where the mysterious "6" comes from.

You can extend this method so that you can add multiple digits and then correct the result to BCD, but it isn't straightforward as you have to detect the binary carry between the nibbles and add 6 to the lower nibble whenever it has occurred.

If we have two packed BCD values in four byte unsigned ints then we can simply add them together:

but the result will be incorrect in any nibble that generated a carry to the next nibble. We need to find out where the carries occur. This we can do because we already know that exclusive or (XOR) is addition without taking the carries into account. So:

is the addition without carry. If we XOR this with the sum that did include a carry there will only be bits set where they differ, i.e bits that result from a carry:

This gives a one at every bit that was generated by a carry, but we are only interested in carries from one nibble to the next and these can only be positioned at the first bit of the nibble. To pick just these out we have to use a mask:

notice that the first nibble cannot have received a carry.

Now we have a carry which has a one in the first bit of any nibble that received a carry from the adjacent nibble. We need to create a mask with a 6 in each position that generated a carry and this we can do using a shift and OR:

Finally we can add the sixes into the result to correct it:

Notice that you cannot allow a carry in the final nibble - the result is an overflow.

You can extend this bit manipulation technique to long long types if you need more digits. You can also make it work for subtraction by using ten’s complement, see the next section.

Summary of Chapter That This Article Is Taken From